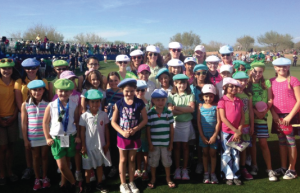 The LPGA announced today that past LPGA-USGA Girls Golf (Girls Golf) participant and current LPGA Tour star Vicky Hurst will serve as the Girls Golf National Ambassador for 2013 and 2014. In this capacity, Hurst will help communicate the benefits of the Girls Golf program whose mission is to improve the lives of girls and women through the game of golf.

This announcement comes as the LPGA begins its U.S. domestic schedule this week with the RR Donnelley Founders Cup in Phoenix, an event which recognizes the past and present of the LPGA while paying it forward for the future of women’s golf with $500,000 from RR Donnelley going to the LPGA-USGA Girls Golf program.

Hurst joins the elite list of LPGA Tour professionals who have graciously agreed to be the ambassador for the program over the last five years. Former Girls Golf members Morgan Pressel and Brittany Lincicome have served as National Ambassadors for LPGA-USGA Girls Golf Program.

“I am thrilled to have been chosen to serve as the National Ambassador for the Girls Golf program,” said the 22-year-old Hurst. “As a former member I can relate to the girls and know how daunting the game can seem when you first begin.  I look forward to interacting with the girls in person this year at the RR Donnelley Founders Cup and the LPGA-USGA Girls Golf Team Championship & Academy, and connecting with them through social media and at LPGA Tour events.”

The only initiative of its kind, Girls Golf is administered through a partnership between The LPGA Foundation and the USGA. Girls Golf has grown to over 260 sites across the United States with over 30,000 girls ages 7-17 expected to participate in 2013.  Through this program young girls learn more than just the game of golf they experience the 5 E’s of Girls Golf; our site directors, instructors and volunteers are there to Empower, Enrich, Engage, Exercise and Energize the girls through activities that will teach the girls not only how to play the game but to become confident individuals.

Hurst is one of many success stories among more than 80,000 girls who have participated in Girls Golf since its inception. She graduated to the LPGA from the Symetra Tour following a five-win season in 2008 when she earned rookie and player of the year honors. She quickly has become a contender on the LPGA and was picked to compete on her first US Solheim Cup team in 2011 with a 1-1-0 record.